Let’s jam! Your guide to prese..

Baked fresh from the farm

Baked fresh from the farm

Food straight from the farm is hard to beat, and when that includes fresh baked bread and pastries, it’s doubly so. Baking Business Magazine takes a look at some Australian farms that have branched out and included daily bread in their business plan. 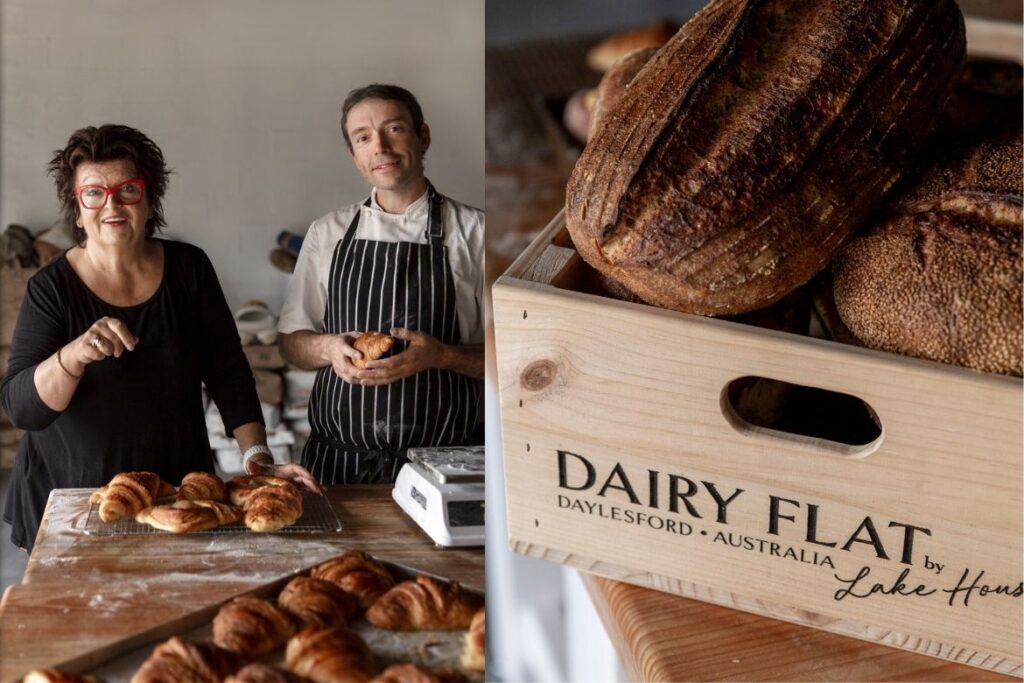 What happens when a one of the country’s most celebrated bakers collaborates with a much-lauded restaurant culinary director?  The answer is Bake House, the Daylesford bakery that opened on Dairy Flat Farm by Lake House to fanfare in 2019.

The bakery is located within an existing semi-underground cellar that can only be accessed via a tunnel beneath the Dairy Flat Farm Lodge, and its shopfront is open solely to the guests staying at the farm, although its range of sourdough, baguettes, fruit Danishes, croissants, and donuts can be found at Lake House as well as the Wolf-Tasker’s more casual country café, Wombat Hill House, in Daylesford.

The Bake House team prides itself on not only supplying its local community with high quality baked items but also on its ethos: supporting local growers and millers of small grain local economies while producing a range whose provenance is always known. 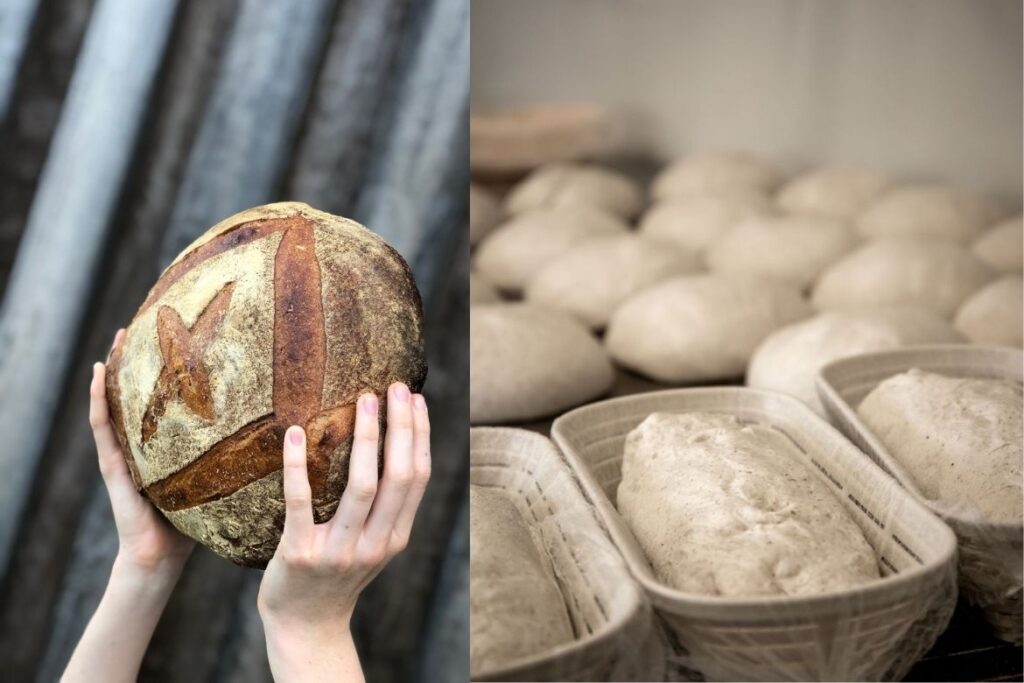 Hidden on a farm in Queensland’s Sunshine Coast hinterland, Ten Acres Farm Bakery focuses on producing good old-fashioned sourdough alongside a range of pastries, cookies and croissants all made using local, organic and sustainably sourced ingredients.

Bakery owners Jamie and Melody Flood had a long-held dream to create a sustainable farm business and leapt at the opportunity when a 10-acre property became available Ninderry in mid-2014.

Except for an established citrus orchard the land was clear, providing a blank slate for the duo to create from. Melody set her talents to the farming side of things, while Jamie’s passion for baking soon saw Ten Acres’ product range quickly garner itself a loyal following amongst locals after it launched in April 2017.

Utilising a stone deck bread oven and a smaller pastry oven, Jamie transforms high quality Australian flour and rainwater that has been harvested and filtered on the farm into sourdough and pastries that are sold at a handful of wholefood stores, cafes and restaurants across the Sunshine Coast.

If that wasn’t enough, the duo also produce a range of marmalades made from imperial mandarins and navel oranges grown on the farm. 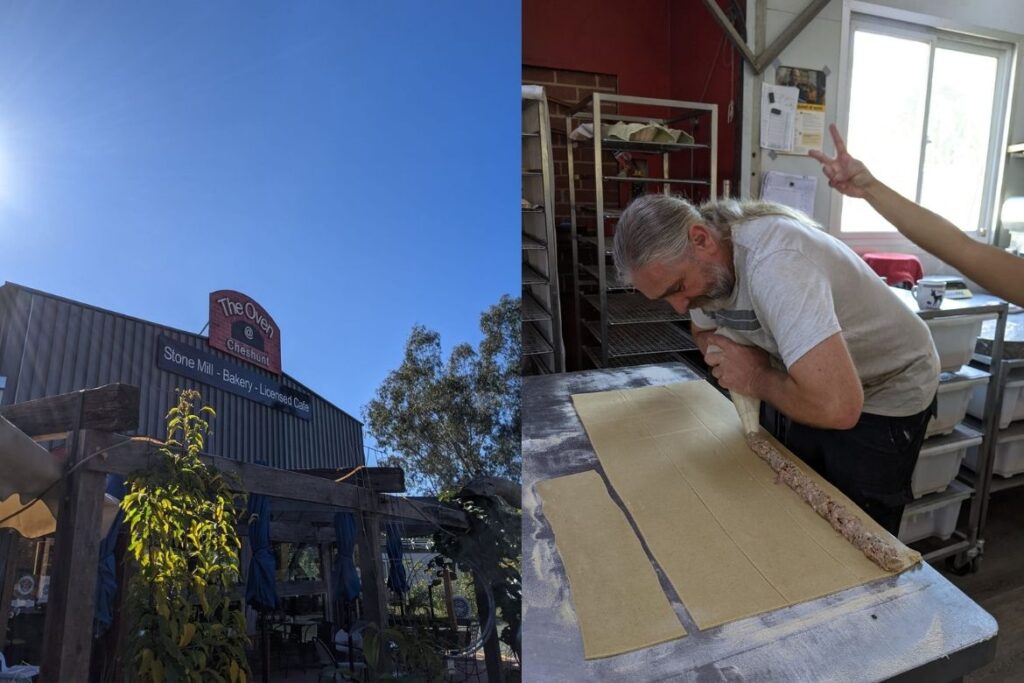 Nestled away in the upper region of Victoria’s King Valley, The Oven at Cheshunt has created a name for itself as being the place to go in the area to purchase fresh, regional produce and exceptional baked goods.

Owners Thomas and Gabi Moritz built The Oven @ Cheshunt themselves, combining years of knowledge and experience of both baking and farming.

Using a traditional stone mill, they mill grain grown on their own organic farm, Boonderoo Farm, which they then transform into an extensive range of pies, brioches, sourdoughs and rye breads that are baked at The Oven in a woodfired oven. 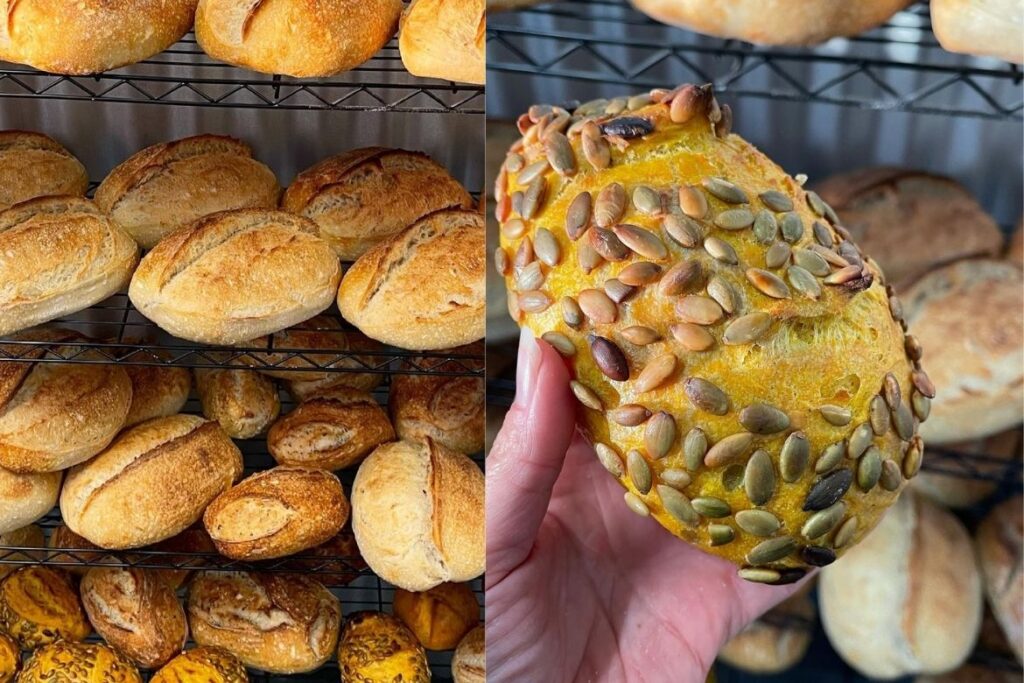 When you think about the Barossa Valley, it is wine that commonly comes to mind. However at Kalleske Farms, they have branched out a bit further, incorporating regular baking into their already busy production schedule.

The certified organic and biodynamic mixed farm is already the sole grape grower for Kalleske Wines, however as of January 2021, owner Amie Kalleske decided to make the move into the kitchen, producing sourdough loaves of varying sizes that are sold wholesale in the region.

Amie says she has come a long way in terms of both skill and confidence when it comes to producing sourdough.

“Currently I’m producing between 80 and 100 loaves per week over two bake day, with my biggest single bake being just over 80 loaves,” Amie says.

“I can only fit 12 loaves at a time in my oven, so a big bake takes a reasonable amount of time.”

As with so many people, it was the arrival of her children that spurred Amie to head back into the kitchen so as to ensure they eating were high quality foods.

“We didn’t want to feed highly processed foods to the kids, and living a bit out of town I went through many phases over the years of refusing to buy bread so as not to be constantly needing to leave the farm to buy it. Instead I’d bake it myself,” she says.

The tumultuous year that was 2020 led Amie to consider producing sourdough on a professional level, largely thanks to the requests of family and friends who would regularly say they’d have a loaf the next time she was baking.

An upgrade to a professional bread oven in addition to completing the 12 week Farmers 2 Founders program gave Amie the footing she needed to take her idea to the next level.

“I absolutely adore sharing something I have made from quality organic ingredients with my community,” she says.

“Having my customers create their own food memories with my bread is such an honour.”

When it comes to farm-based bakeries with reputations that precede them, it’s hard to go past Byron Bay-based The Bread Social, whose wares have been lining the shelves at The Farm at Byron Bay since 2015.

Spearheaded by Tom Scott, Sam Saulwick and Paul Giddings, the bakery has swiftly become the darling of the Northern Rivers region, thanks in large part to its idyllic location as well as its focus on showcasing local and seasonal produce. Its close relationship with the farmers at The Farm also allows The Bread Social team to tailor their offerings to incorporate what’s currently being produced as well as forward plan for the upcoming growing season.

The Bread Social produces a wide selection of baked goods from brioche to panini and a wide range of pastries, however it’s their prized sourdough made using organic flour and 80 per cent hydration that remains the bakery’s specialty.

The Farm at Byron Bay has developed a cult-like following amongst visitors to the region, so it’s not a surprise that many opt to stop in at The Produce Store to grab a coffee and a delicious pastry to munch on while they wander around The Farm’s 80 acres, or purchase something more substantial from The Bread Social range to either eat while they laze on the grass in the sun near the main hub or to take home with them.

Farm bakeries, On the map, On Trend

Maxum Foods provides Westgold UHT Whipping Cream, which is suitable for a wide range of product, culinary and industrial applications.

Glad is pleased to announce the launch of the Glad to be Green Compostable Bake Paper, a sustainably sourced compostable brown bake paper.

Drink and decorate, chug and churn or lager and laminate: here are a few businesses in the know with very on-trend Sip ‘n’ Bake classes.

Amy Simpson is the creator of Paddington Jams & Sauces, a range of traditional jams and condiments with a new-age twist.

We’re here with the comprehensive hows and whys of using natural colours to give your products the pop they need without the artificial additives.

Haven't been this invested in a sprinkle saga sinc

Just love those tropical flavours at this time of

@markdanielspatisserie my mouth is literally water

@brightons.best.bakehouse cleaned up at the Tassie
More mushroom content—but these are actually mer

Okay, mushrooms are pretty magical (no not those o

@mooncruller, this is the only kind of swimming I'

Sad I can't get these in Brisbane, but the dress I