Rescued Cream Transformed Into Puddings For The Po...

Rescued Cream Transformed Into Puddings For The Poor 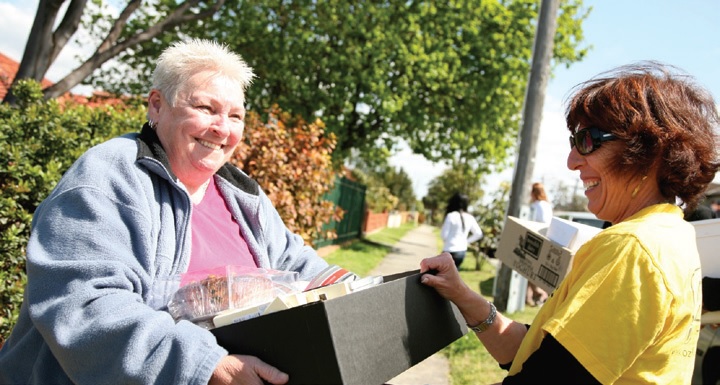 Australian food rescue operation Ozharvest has saved the equivalent of 20 bathtubs full of fresh thickened cream from the rubbish dump.

This surplus cream, along with a week’s excess bread supply and donated product – including herbie’s nutmeg, heilala Vanilla Pods and dried fruit from Frutex – was transformed into 17,040 serves of bread and butter. the dessert was donated on the same day to people in need via hundreds of charities and welfare agencies.

around 30 Ozharvest volunteers braved the 4am start and put the lid on the 17,040th pudding tray at 1pm. Many volunteers even working a full nine-hour shift under the direction of professional bread makers, dessert makers and cream experts.

Pierre Issa from Pepe Saya, Merna taouk from dessertmakers and Michael Klausen from Brasserie Bread came up with the brilliant idea of saving thousands of litres of cream that would otherwise have been discarded.

“When Ozharvest called me, I was racking my brain to find a solution to this challenge. then it just made so much sense. I make butter for a living, Merna makes puddings and Michael is the king of bread,” Pierre said.

“how could we not help turn what would have been thrown out into something delicious for those in need?”

“the thought of making that many bread and butter puddings by hand was very daunting, but to know where the end product will be going was a huge motivator,” Merna added.

Ozharvest founder and chief executive officer Ronni Kahn thanked the initiatives supporters, who are not only passionate about food but are also against food waste.

“We were able to turn a problem into an instant solution,” Ronni said.

“It’s always amazing to see people get straight into gear and go above and beyond to help out others.”

Five thousand puddings will also be served up for free at Ozharvest’s upcoming Feeding the 5000 event. Part of a global United Nations campaign against food waste, the event will be held in Sydney’s Martin Place on July 29.

May is all about honey at Banksia Bakehouse with the team of pastry chefs striking up a sweet collaboration with Amber Drop Honey.

Matt Preston asked for help to find North Melbourne's best bakery, and the results are in—and wholly unsurprising to those in the know!

A new German bakery will be bringing typically Deutsch earthy breads, pretzels and berliners (jam doughnuts) to the Gold Coast.

What are your thoughts? I’m definitely guilty of

WOW! @supermoonbakehouse has a new croissant which

Love an OG bickie, but there are some great creati

Naming a cake Colin or Cuthbert... tell me you’r

Someone PLEASE make me step away from the desserts

Any Brissy locals after something different on Fri