Three simple tips to master yo.. 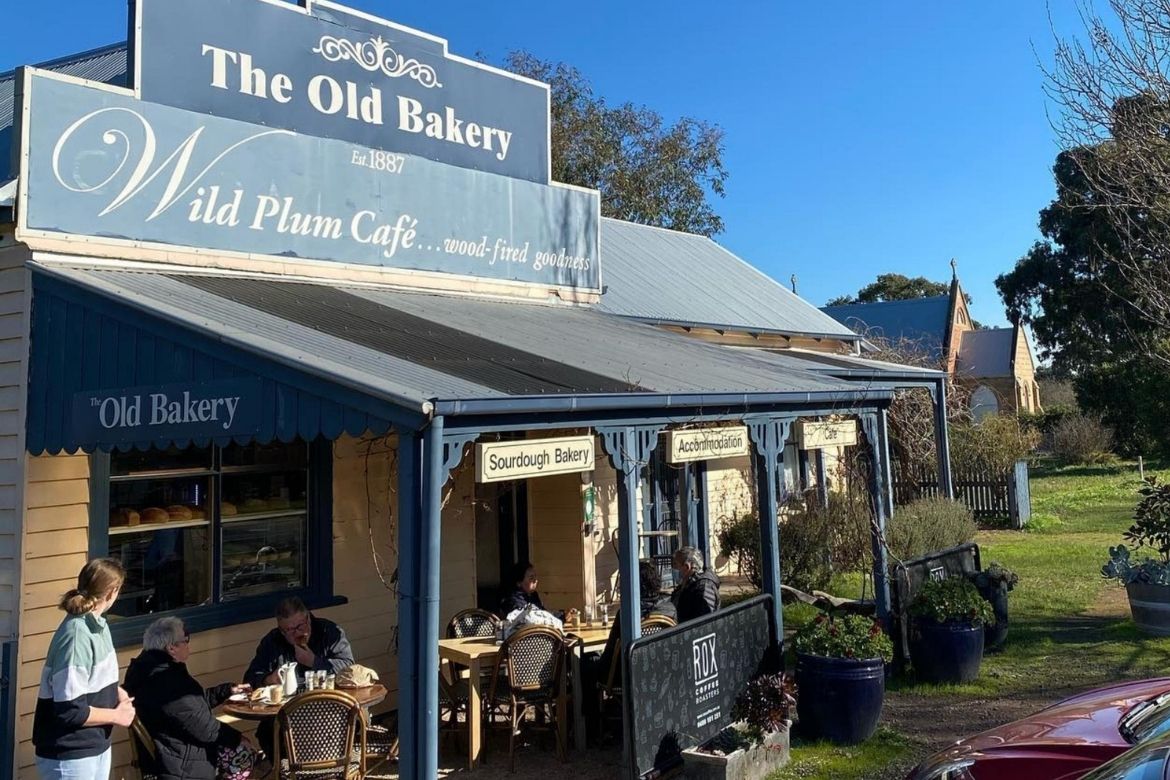 In case the name didn’t give it away, Dunkeld Old Bakery is, well, old. However, its current owners, Geoff and Belinda Potter, are not. Since buying the business in 2017, it has been a steep learning curve for Geoff who keeps insisting he’s “not a real baker”.

This is despite the fact that when I phoned to speak with Geoff, he was literally holding the phone with one hand and folding pies with the other. If you can do the job one-handed, that more than qualifies you in my opinion.

“I’m not a qualified baker, I’m self-taught and pretty much learned here,” he says.

“I’m not going to understate that, because we’re making pastries here by hand now that are as good as anything you’ll get in the world, and I’m pretty proud of that.

“Put it this way; coming in here, most people with a baking background wouldn’t know what to do, because we don’t have any machines here to do it for them. I’ve experienced a bit of that, where they come in and say, ‘I’ve been a baker for 10 years’, then look around and ask, ‘where’s this? Where’s that?’ and I say, ‘over here brother—it’s called a rolling pin’. That’s where we’re at.” 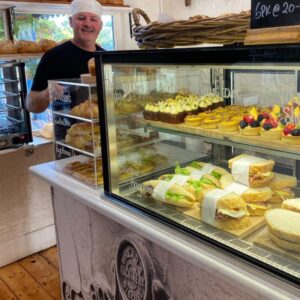 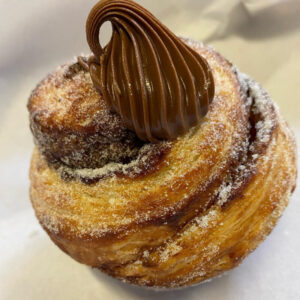 Set in a quaint little cottage off the main road of Dunkeld, the bakery is easy to miss if you don’t know about it. It began operating in 1887 (according to the sign—Geoff says there may be a 10-year discrepancy there) and has always been a bakery, aside from a small hiatus between the ‘70s and ‘90s before reopening in 2000.

Dunkeld is a tiny township—population 600—on the fringe of the Grampians, which Geoff says is “absolutely spectacular”.

“It’s just a beautiful little place to live, with well-educated people and, to be blunt, no ferals,” he laughs.

A small operation, Geoff is the only baker and can often be found in the bakery from 4 A.M. through to 6 P.M. and although there is still a working historical Scotch woodfired oven, he now uses an electric one instead. 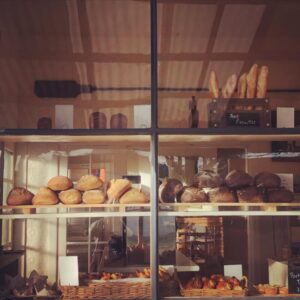 “It’s extremely romantic, but it’s not very efficient and not very economical,” Geoff says. “Back in the day when labour was cheap and wood was cheap, it was probably fantastic. I have done the odd slow-cooked pie mixes and things like that in there, but to bake 300 loaves of bread takes a bit of power.

“I lease the building from the previous owner and at this point, I’m not particularly keen on buying a 140 year old weatherboard building—there’s a lot of work in that.”

He started working at the bakery under its previous owner, with no previous baking experience or training aside from a crash course from the then-owner—who wasn’t a baker either! Not long after, the owner left, and Geoff took over.

“Convenience mostly. I needed a job that was convenient—I live 150 metres away—and the opportunity to buy a business and have a crack at that once I got the baking thing under control seemed like a good idea at the time.” 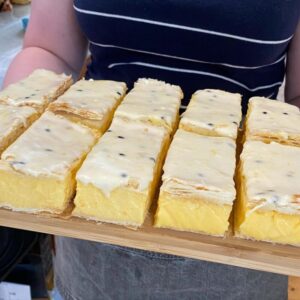 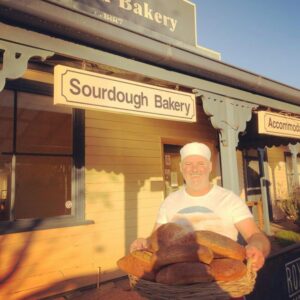 As far as hospitality goes, this bakery offers it all—fresh and delicious food, coffee, and even guesthouse accommodation, complete with a buffet breakfast.

Day to day, Geoff bakes crusty sourdough loaves, baguettes, croissants, slices, and gourmet pies—think beef and ale, pork and cider and pork and fennel sausage rolls—and despite learning to bake through a baptism of fire, Dunkeld Old Bakery has quickly made a name for itself as a top regional bakery to visit.

“We’ve had a lot of inspiration from the Tivoli Road Bakery’s Michael James,” he says.

“We’ve had our bread on the menu at the Royal Mail Hotel just around the corner. It’s that kind of market here I suppose—pastry, sourdough and good coffee seems to be enough. “Which is why I joke about not being a real bakery, because half the grey nomads that come in here are disappointed because I can’t sell them a mince meat pie for five bucks.” 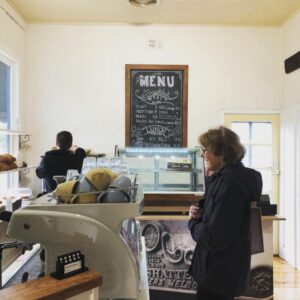 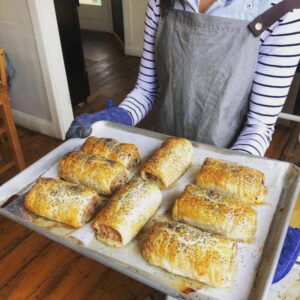 While he thinks their vanilla slice could be up there with the best, for Geoff and Belinda, there is just not enough energy left over for competitions.

“We’re trying to keep our heads above water as it is, and we have four teenagers so that’s probably more than enough on our plate.”

In fact, Belinda actually has her own full-time job with the Australian Government, but still helps at the bakery when needed, as well as handling the marketing and PR side of things. Besides the two of them, there are a handful of young part-timers, and the kids help out too.

Like many small businesses, Dunkeld Old Bakery and the Potters have had a tough slog over the past two years, navigating Victoria’s many intense pandemic lockdowns, but Geoff thinks that overall, they’re doing okay.

“A lot of people haven’t done so well over the past two years, but we’ll probably come out the other side of it pretty good, so I’m not too fussed about that,” he says.

“We keep our expenses and capital pretty low and we work really hard, so I’ll probably keep plugging away at it.

After thinking he might need to close his bakery doors, Rob Pirina opened two new businesses during COVID and they're going gangbusters.

Like a phoenix rising from the ashes of career burnout, Adelaide newcomer The Sugar Man has hit the sweet spot for owner Alex Crawford.

In case the name didn’t give it away, Dunkeld Old Bakery is, well, old. However, its current owners, Geoff and Belinda Potter, are not.