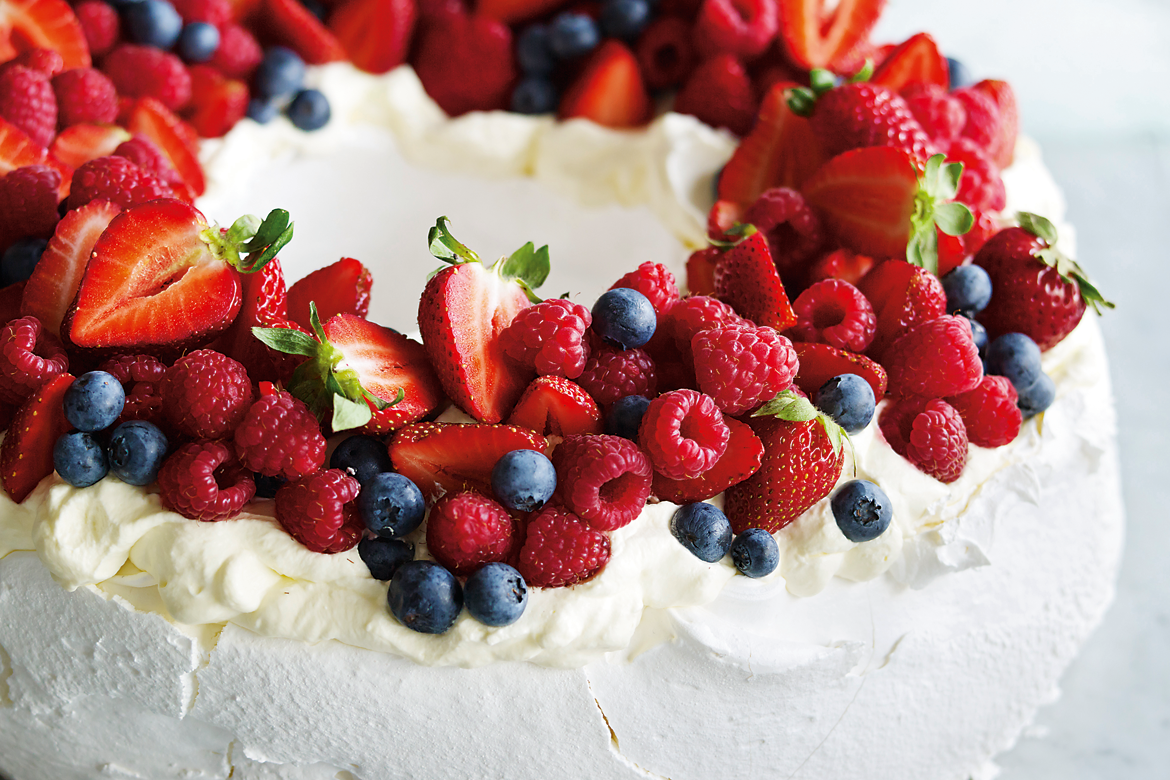 Despite being surrounded with contentious debate about whether it originated in Australia or New Zealand, the pavlova is a much-loved dessert at Christmas because it’s light, fresh, sweet and fruity, with a crisp exterior and soft, marshmallowy inside. Here’s a basic recipe in a beautiful festive shape to get you started, but get experimental with flavours such as salted caramel in the meringue or decorate with whatever decadent toppings your heart desires.

Preheat the oven to 150°C. Line a large baking tray with baking paper. With a pencil, draw a large circle approximately 30cm (12 inches) in diameter, then draw a second circle measuring 10cm in the middle. Turn the paper pencil-side down on the tray.

Put the egg whites and sugar in a large bowl over a saucepan of simmering water, making sure the bowl doesn’t touch the water, and stir for about 5–7 minutes, until the sugar is dissolved. At this stage the mixture will be warm.

Pour the mixture into the bowl of an electric mixer fitted with a whisk attachment. Whisk the egg whites and sugar mixture until thick and the mixture has cooled, approximately 10–15 minutes.

Spoon onto the prepared tray and shape into a wreath using the circles as a guide.

Top with lashings of vanilla whipped cream and copious amounts of mixed berries.

Split the half vanilla bean lengthways, and then scrape the seeds using the tip of a sharp knife.

Combine the cream, vanilla seeds and sugar in a bowl and use an electric mixer with a whisk attachment to whisk the cream until it forms soft peaks. 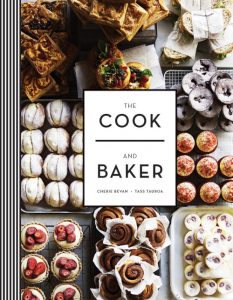 The Cook and Baker by Cherie Bevan and Tass Tauroa, published by Murdoch Books

The VHS120 Bakery Vacuum from Nilfisk is a purpose built, high temperature vacuum that enables cleaning between batches.

This tempering machine stands out in market due to its new patented system allowing for the removal of the tempering screw pump in minutes.

AFIS Passionfruit Paste is a deep yellow paste made with fruit pulp and seeds, which has a typical passionfruit flavour and aroma.

Westgold butter is proven to perform across all culinary applications, enhancing the ingredients in a dish and rounding out flavours beautifully.

Mushrooms are perfect in pies because they keep their shape and take on all the other flavours.

Sticky date pudding is my go-to winter dessert, and the four-way layering of warming ginger only serves to solidify it as a seasonal stayer.

A roast may be the traditional choice for a Christmas feast, but this crisp, light, puff pastry Wellington with mushrooms makes a perfect alternative.

INSTAGRAM
Why am I surprised to see Easter stuff on Instagra

Look, it has been a WEEK. But it’s nothing a hot

😫 we’ve all been Zucked today!

It has been one of those days, and I would kill fo

According to @georgesbakehousekennington I may ac

Do you smoke your own meat in house like @flourand

Not enough bread in our feed, but @northstreetstor