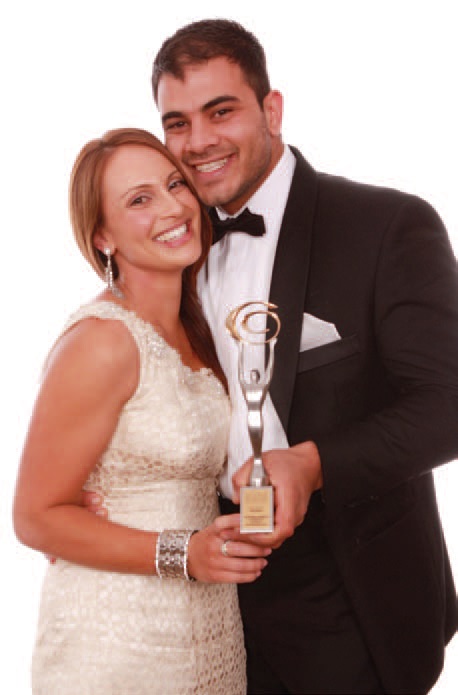 In front of a crowd of more than 900 finalists, Glenorie baker Robert Pirina (pictured with wife Louise) nabbed the title of Australia’s Champion Bakery/Cake Store at the Australian Small Business Champion of Champions Awards 2012.

Mr Pirina, 28, described the award as “the icing on the cake” and the pinnacle of his career thus far following his previous successes in the industry.

Awards, community projects and world beaters nearly earning him a mention in The Guinness Book of Records have been regular events for the independent family baker whose youth belies his business acumen.

In 2011 peer recognition for Mr Pirina’s business flair took on new proportions when he won the WSABE Young Entrepreneur of the Year and overall Retailer of the Year awards for Western Sydney.

After a succession of industry awards including Best Bakery in the Hawkesbury and recognition of Glenorie Bakery and the Outback Bakehouse at Windsor in the Daily Telegraph’s Top Five Pies in Sydney survey, Mr Pirina also went on to win the Greater Sydney Tourism Award in 2011.

Mr Pirina said he was proud and grateful to all his supporters to have been so honoured with his latest win.

“The work now begins. Staying at the top is hard. Everyone would like to knock you off the perch, but I am not afraid of good competition,” he said. Mr Pirina went on to encourage all finalists and winners to stay in the game and to be proud of their small business contribution to Australia. “I love this great country of hard-working small business owners. To be named a champion among them is truly an honour.”

May is all about honey at Banksia Bakehouse with the team of pastry chefs striking up a sweet collaboration with Amber Drop Honey.

Matt Preston asked for help to find North Melbourne's best bakery, and the results are in—and wholly unsurprising to those in the know!

A new German bakery will be bringing typically Deutsch earthy breads, pretzels and berliners (jam doughnuts) to the Gold Coast.

What are your thoughts? I’m definitely guilty of

WOW! @supermoonbakehouse has a new croissant which

Love an OG bickie, but there are some great creati

Naming a cake Colin or Cuthbert... tell me you’r

Someone PLEASE make me step away from the desserts

Any Brissy locals after something different on Fri